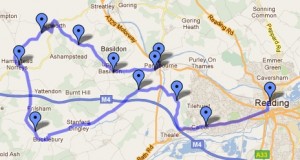 The route starts with an uphill stretch out of Pangbourne, with some traffic. We turn right at the village of Upper Basildon, onto a road which is much quieter. The route flattens out and we have nice views from the lane. Continue to Aldworth which had an old fashioned feel – perhaps it was the little 1930s car parked out in the street. Shortly afterwards, we take a cool leafy lane, down hill, towards Hampstead Norreys.

At Hampstead Norreys we stop in the White Hart for lunch. One of us has a steak, and the other had a roasted vegetable baguette and chips – suitably filling!

A couple of miles further on and the road flattens out – and we had several miles of flat skating alongside the river Pang – wonderful!

A mile before Tidmarsh, we could have headed back up to Pangbourne, but instead decided to carry on until Reading. A steep and busy hill just beyond Tidmarsh would have taken us into the back streets of Reading – but we didn’t fancy that. An idea was to take a gravel track and then a footpath up the hill (on foot) to avoid this hill – but due to some miscommunication we ended up going all the way down the track reaching the A4 – M4 junction. We then followed the A4 into Reading – some of it had a good cycle track – in other parts a very narrow pavement – with bushes that could have done with a trim. This final stretch wasn’t particularly pleasant – so returning to Pangbourne as originally planned would probably have been better.

This site uses Akismet to reduce spam. Learn how your comment data is processed.